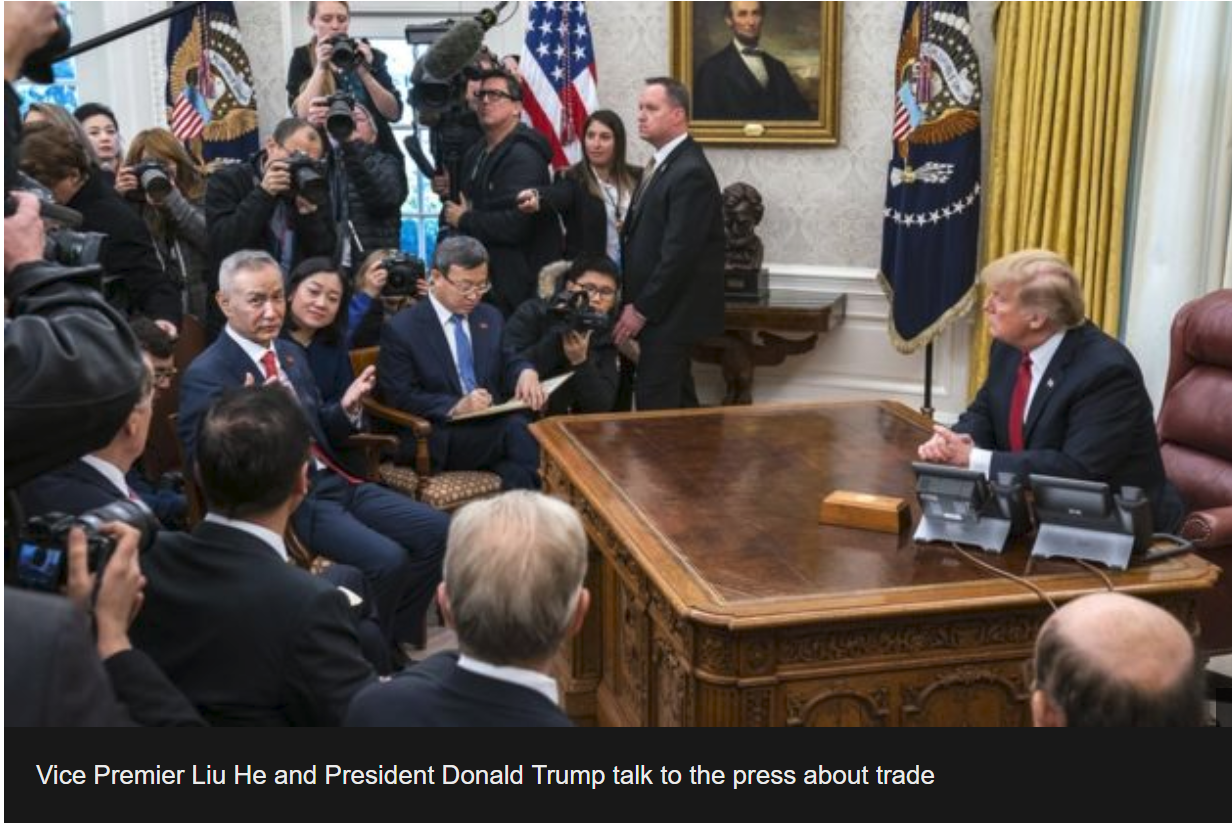 China’s trade delegation says it made “important progress” in the latest round of talks with the US, China’s state media reports.

At the end of a two-day meeting in Washington, no deal was reached but China pledged to buy more US soybeans.

US President Donald Trump touted the promise as proof that the two sides were making progress.

They are pushing to reach a deal by 1 March to avert an escalation in tariffs.

At a press conference with Vice Premier Liu He on Thursday, President Trump said he hoped to meet Chinese President Xi Jinping to hash out a final agreement by the looming deadline.

“We have made tremendous progress,” President Trump said.

“That doesn’t mean you’re going to have a deal but there’s a tremendous relationship and a warm feeling.”

In December, the two countries agreed to 90 days of negotiations, in an effort to defuse their escalating trade war, which had led to new tariffs on billions of dollars’ worth of goods.

Shortly after the truce took effect, China – by far the world’s biggest importer of soybeans – bought 1.13 million tonnes of the crop from the U.S

The White House said on Thursday the country had agreed to purchase an additional 5 million tonnes of soybeans.

Soybeans have been at the forefront of the negotiations as US farmers have suffered from the sudden loss of their largest customer.

The country imported more than 30 million tonnes of soybeans from the US in 2017 – a figure that dropped sharply last year amid the trade war.

China’s state media has painted these talks as “progress” based on the offer of measures or reforms that China wants to see or needs.

These are not concessions, but steps that are in line with reform and opening up already planned by President Xi.

What politicians call the retail takeaway – in this case it literally is one – of buying more soybeans from American farmers went down well with President Trump.

A deal that the lead US negotiator, Trade Representative Robert Lighthizer, will sign off on is likely to involve verifiable, structural changes to the economy.

China is far less likely to concede that.

China would rather simply buy more soybeans and other goods or services to help President Trump fulfil his campaign pledge to deal with the trade imbalance between the two countries.

Mr Lighthizer said he was focused on securing a enforceable deal. He warned that many issues remained unresolved.

The US pressed for changes on intellectual property laws and rules that limit the operations of foreign companies in China, both of which have been key sticking points in negotiations.

The two sides “attached great importance to the issues of intellectual property protection and technology transfer and agreed to further strengthen cooperation”, according to Xinhua.

“At this point, it’s impossible for me to predict success but we are in a place that, if things work, it could happen.”